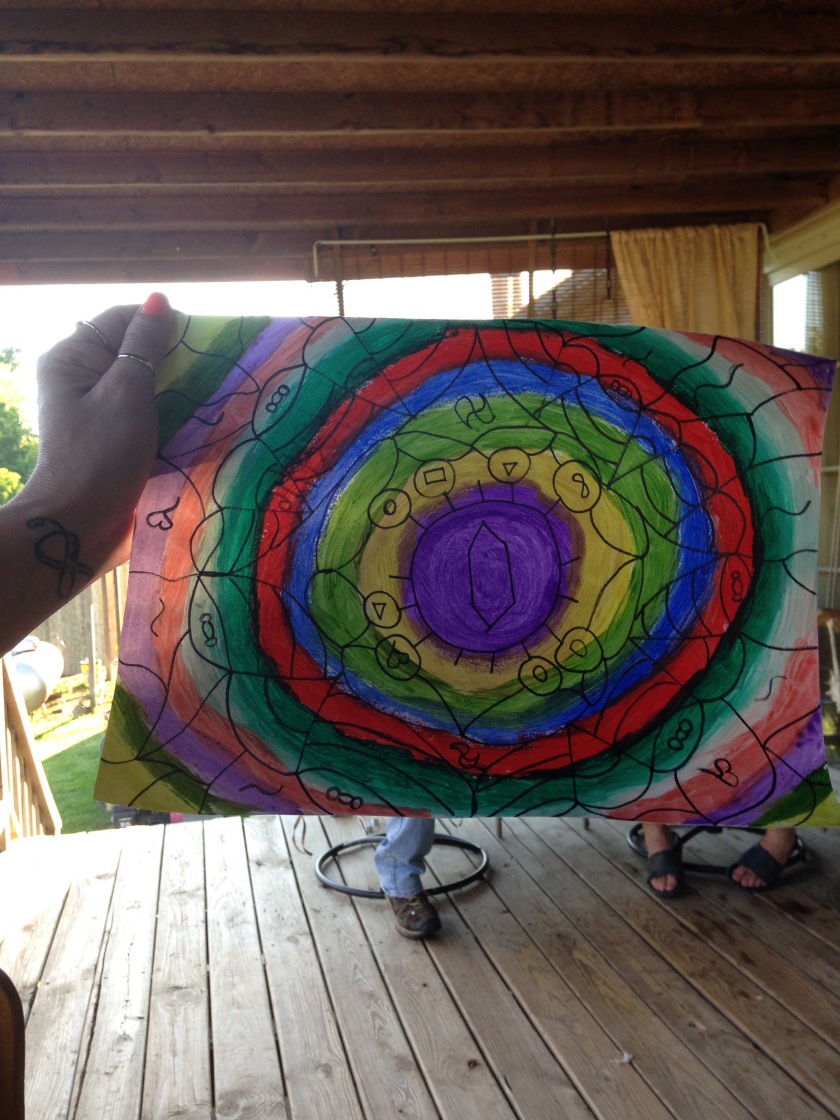 My last post was 41 days ago. We have had so much going on. I have a lot of stuff to share. But first and foremost, after a very long and drawn out process we have a whole new set of diagnosis. I was told to let go of any past diagnosis. We met with the doctor and therapist this week. They had to collaborate with other doctors for a final determination on Lexi. I was told that she is one of their hardest cases. With that being said, we have a new list of diagnosis. Autism spectrum disorder-without intellectual impairment-with selective mutism. generalized anxiety, and insomnia.

I am confident that the doctors finally know what they are talking about. It has took us 13 years to get this diagnosis. I know within the deepest depths of my heart, that this is the proper diagnosis and that we are finally headed in the right direction. I have so many emotions right now. One of them being a huge sigh of relief.

My plan is to post more often. I have so much to share. Thank you for reading and following. Lots of love!

Earlier this week, we finished at testing. Thank goodness! The doctor has scored everything and will be giving us a report this week.
She did touch base with us on a few things. Lexi has a average IQ but is slightly proficient in two areas.
The sensory processing disorder or diagnosis still stands. Although Alexis did show A few signs of autism, she does not believe that Alexis is autistic. So, our current diagnosis’ are generalized depression, social anxiety on the verge of Agoura phobia, sensory processing disorder, and she mentioned ADHD.
She said that she would go into further detail on her report and be sure to give us a copy next week, as well as answering our questions.
I have to be completely honest this is not the first time that we have had a diagnosis of ADHD. And, I’m not real sure how I feel about that diagnosis. As for now, I will wait for the report. And see what happens with medication changes.

Today was test day, it took us 3 1/2 hours. Due to the previous conversation that I had briefly over the phone with the therapist, I was under the impression that she was not going to be testing her for autism.

Much to my surprise when we arrived this morning, when she came out to call Lexi back, she had a clipboard full of papers for me to fill out.

All of these papers I had never seen before. It took me quite some time to fill them out.

Near the end of the appointment, The therapist came to get the papers and took a few minutes to talk. She informed me that the testing was taking longer than expected. And she would have to use Lexis next appointment to finish up. She told me that it could take two weeks for her to total everything and be able to give me results.

She said at that point we would have a meeting with the psychiatrist and discuss possibly increasing medicine.

she told me that Alexis had a very high IQ as far as she could tell already. But, she had scored lower than expected in some areas.

We are just really ready to have answers. I have been waiting 13 years to know what is going on.

Tomorrow is the day that she finishes her testing. I had a chance to speak with the therapist over the phone last week. she informed me that although Alexis had a previous diagnosis of ASD. She believes that there is a slim chance of her giving her that diagnosis. She said she has very obvious sensory issues. And that if she is autistic that it would be very high functioning.

I was under the impression that all of this testing was for IQ and autism. During our phone conversation I learned that this is strictly IQ and only being used to benefit the doctor due to Alexis having selective mutism.

I just hate not knowing what is going on. everything is always so back and forth. and with Alexis being 16 I hardly ever get to communicate with the therapist. she had an appointment last week with the psychiatrist those appointments always go well. he is always sure to keep me informed.
i’ll be sure to update after tomorrow’s appointment.

On Saturday, I participated in my first 5K. It was to raise awareness for developmental disabilities.  I really wasn’t sure how I would do. But, I planned on walking.

And to top it all off it was going to be very cold and snow. The first 5 to 10 minutes was very hard on the legs. After that, it got a little easier.

I really enjoyed it. It felt great to get out and raise awareness. And to top it off, I was able to get a little bit of a workout. Needless to say, I am now obsessed with 5K’s.

There is one for autism awareness coming up on April 30. I believe that will be my next one.

And, seeing as how we’ve not seen the therapist for two weeks due to her booked schedule. This helps to keep my mind off of that. Something positive to focus on is always a great thing.

Why must it take so long? We’re about 4 weeks into IQ testing and have about another 3 weeks before we will know something on Lexi. I hate the feeling of being at a standstill with everything. My patience is growing thin. It doesn’t help that suddenly, there is a 2 wk. gap in appointments for Lexi with the therapist.

Lexi went earlier this week to see her doctor and continue IQ testing. I thought for sure that I would hear something from the doctor in regards to the testing. So, I patiently waited all week, only to find out that it could be 2 more weeks until they finish.

I obviously have never been through this before. When I talked to Lexi about it she was so proud. She said “well, I have to answer questions until I get one wrong. So, the doctor told me it’s gonna take another week or two to finish.” I know she is a very smart girl. At this moment I was proud!

It’s been a really big struggle for us with doctors in the past. So, why rush things now? I’ve waited years to get answers and now we are getting help.

I think the one thing that aggravates me is that they’re still so back and forth with the autism stuff. One says they’re gonna test her and the other has a different opinion. In my opinion, they should just do the testing so that we know for sure.

The one thing that everyone agrees on is that she has definite SPD, Agoraphobia, Anxiety and Depression. Since we started seeing these doctors, we’ve noticed a improvement. Which means we’re doing something right. And that makes all of us happy.

She has already came so far. So, for now, I will be a more patient momma. I will wait for more answers. Even if it drives me bonkers. lol!

We had appointments with both doctors this week. Cognitive therapist and psychiatrist. We learned yesterday that she had been previously diagnosed with Autism Spectrum Disorder. 😳

So, we had did some testing with the therapist this week and will continue to test next week at our appointment. But, I was under the impression that it was a basic IQ test. Not that I’m upset about them testing her. It’s just that I’m blown away by previous diagnosis not being told to me.

I also learned yesterday that they are also doing Spectrum testing.

Why would they do the Autism testing if a previous doctor had diagnosed her with ASD?

She is 16 years old with definite SPD. Why wouldn’t doctors listen to me before? Like years ago. Ugh!

Back when Lexi was 3 years old, I started to notice that some things was harder for her than most children her age. As far as development with age goes, she was on key. But, she started to really have trouble with a lot of her clothing, she was very shy, very sensitive to smells, lights, sounds and such.

In the mean time, we had another child. Beautiful little boy! She didn’t seem to be jealous. As all of these things started happening before her brother arrived.

I brought this to the attention of her pediatrician, whom said “I think she’s fine”.  Me being a new mother, I trusted her. As time started to pass and things wasn’t changing, sometimes they felt as though it was getting harder and more and more was happening. She started kindergarten. And I requested a referral or testing. Her pediatrician wouldn’t listen to me. She kept shoving it aside saying it was all normal for a child her age.

Fast foward to 2nd grade. It was all getting harder. It was very labor ing to get her motivated in the mornings. Going to school for her was a battle. I felt so sorry for her. Facility started to notice.

In the 3rd and 4th grade the school counselor started a reward program for her to come to school. It worked for a few weeks but was never really successful. She suggested some testing and spoke to her pediatrician.

Finally… Someone was listening and seeing it also.

To make a long story short. We ended up testing for tactile defensiveness and they ruled that out. We started seeing a psychiatrist and going to family guidance for play therapy and none of this was helping. They referred her to a different psychiatrist.

Him and I did not see eye to eye. He had missed diagnosed her with ADHD and prescribed her medication which made her very ill. He then told us that she would need to find a new doctor because he was going to be moving his practice. Which honestly was a huge relief.

The next doctor was able to break it down a little bit more. We was told that she had obsessive compulsive disorder,separation anxiety, and slight depression. He prescribed her medication. The medication helped but due to her bad experience with medication I wasn’t able to get her to take it every day.

We are currently withdrawing her from school per her doctor. And testing her IQ. Because she is very intelligent. And The doctors are thinking that she is on the spectrum. And she is currently taking her medication. 🙂

She is beautiful inside and out! My children are my world.

Tracy's Got Your Back

'If you're funny, if there is something that makes you laugh, then every day's going to be okay.' - Tom Hanks

A month in the life of an Autism Family....the good, the bad and the damned ugly!

Empowering People to Pursue Their Potential One Note at a Time

Quips From a Mama's Eyes...

Always remember that you are absolutely unique. Just like everyone else. -- Margaret Mead

A journey into Cade's world

Raising 5 Kids With Disabilities and Remaining Sane Blog
The Bullshit Fairy
Simple. I Just Do.

I'm a Remarried Mom, He's a Special Needs Kid... Musings on the answer to the question, "How do you do it?"

My life with Autism

Momma on the Edge

Confessions of a Special Needs Mom

Diary of female autism trying to understand themselves and the world

One mom's side of the autism spectrum

My Treasure In Thee

Just a few thoughts regarding our life with a child who has special needs and life in general.